Play it instead of: Super Ghouls n’ Ghosts

Believe the hype: Super Ghouls n’ Ghosts is the hardest game that I’ve ever played.

I blame the jumping. In a post-Super Mario Bros. world, we got spoiled. We’re used to controlling characters while they’re in the air. In most games, you can steer the heroes even after they leap, and guide them to the perfect landing spot.

Jumping doesn’t work like that in real life, and it doesn’t work that way in Super Ghouls n’ Ghosts either. The jump button is a commitment. Once you’re airborne, can’t change direction. You can’t extend your jump, and you can’t cut it short. You’re going to land where you were always going to land, and if a monster manages to sneak underfoot in the meantime, that’s just too damn bad.

You only get two hits in Super Ghouls n’ Ghosts, so a single mistake can have big repercussions. Mistakes are easy to make, too. While the level layouts, including bigger enemies’ positions, remain constant, Super Ghouls n’ Ghosts can get fairly random. Zombies rise from the ground at random. As a result, that spot that was safe when you started your jump may end up filled with hazards before you land. If you’ve already leapt, there’s nothing you can do about it.

Super Ghouls n’ Ghosts‘ hero, Arthur, does have one defense against randomly appearing foes: the double jump. You can’t change directions during a jump, but while you’re airborne, you can leap a second time. Since that’s technically the beginning of a second jump, you can use the opportunity to switch directions or stop forward progression. That can still lead you into trouble—once you’ve executed the second jump, you’re entirely at the game’s mercy—but it gives you the impression that you have a fighting chance.

Other challenges don’t seem as fair. As an early Super NES game, Super Ghouls n’ Ghosts slows down frequently. That causes havoc with the platforming, which requires precise timing if you want to survive. When the game’s changing speeds, it becomes hard to judge where your jump is going to land, and sometimes crucial button presses don’t register exactly when you want them to.

Oh, also? Once you get halfway through the first level, a giant wave appears and kills you instantly unless you’re in the exact right position. Yeah, it’s that kind of game.

You’ll notice that I haven’t even gotten to Maldita Castilla yet. Here’s why: compared to Super Ghouls n’ Ghosts, it’s more or less the exact same game. That’s on purpose: Maldita Castilla is described as a love letter to “the best of retro platformers.” It’s not hard to figure out which platformer that is. 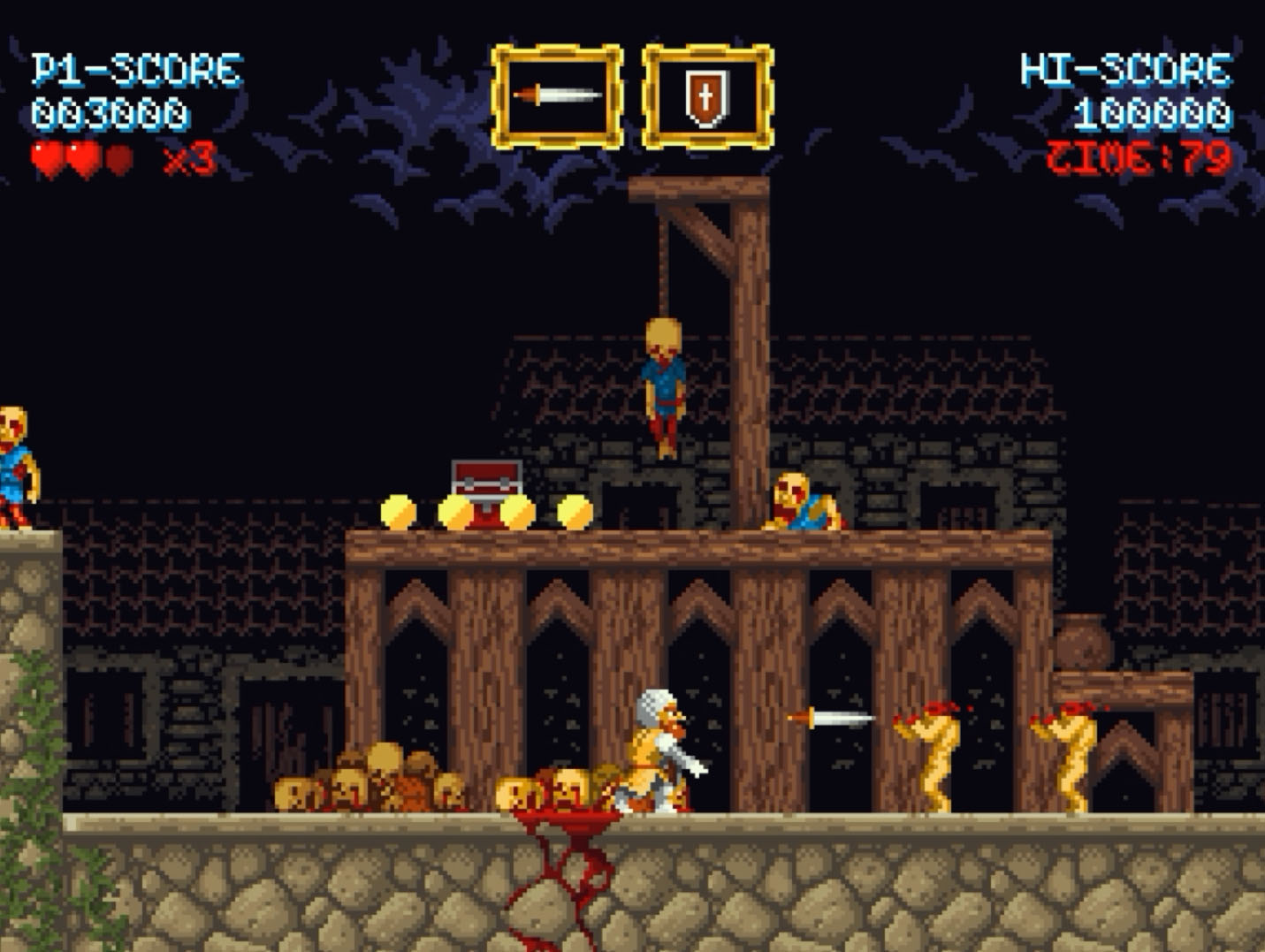 Maldita Castilla plays up Ghouls n’ Ghosts’ horror setting, dropping gory background elements like hanging bodies and vulture-ridden corpses into the mix. Level layouts differ, and the early going isn’t quite as busy or punishing, but everything else is pretty much the same. You can nudge Maldita Castilla’s knight side-to-side in mid-air, but the adjustment is subtle. You still need to look before you leap.

Thankfully, the technical issues that plague Super Ghouls n’ Ghosts don’t reappear in Maldita Castilla—Maldita’s retro influence might mean that the game comes with a “scanline” filter that mimics old arcade screens, but it doesn’t go as far as mimicking slowdown or other bugs. If you want to challenge yourself, either Super Ghouls n’ Ghosts or Maldita Castilla will do. If you want a game that plays entirely fair, Maldita Castilla has a small edge over the competition. Don’t worry: no matter which game you choose, you’ll be delightfully frustrated either way.