What is a "duckblur?" The DuckTales theme song's biggest secrets revealed!

DuckTales might’ve ended its award-winning run on television in 1990, but its iconic theme song lives on. In 2010, Time Magazine named the DuckTales one of the very best cartoon theme songs of all time. A search for “DuckTales cover” on YouTube yields 250,000 results, including a performance by a young Darren Criss (Glee, A Very Potter Musical) and another starring actual ducks. In 2016, the song backed a winning performance on Dancing with the Stars.

So of course the song will return when Disney’s brand new DuckTales series hits the airwaves on August 12, 2017. After all, the song is just as important to DuckTales’ legacy as Scrooge McDuck, his nephews, or his hapless pilot, Launchpad McQuack. Disney knows it, too. When Disney revealed the show’s brand new voice cast, it did so by releasing a cover of the song performed by stars like David Tennant, Beck Bennett, Ben Schwartz, Kate Micucci, and others. The first episode’s title, “Woo-oo,” comes from the song’s chorus. A brand new rendition of the tune, performed by former American Idol contestant Felicia Barton, kicks off each and every episode.

In other words, it’s more or less impossible to separate DuckTales from its theme. But what makes the DuckTales theme so good, exactly? We talked to songwriter Mark Mueller, who composed DuckTales’ music and lyrics, to find out.

You know Mark Mueller, even if you don’t 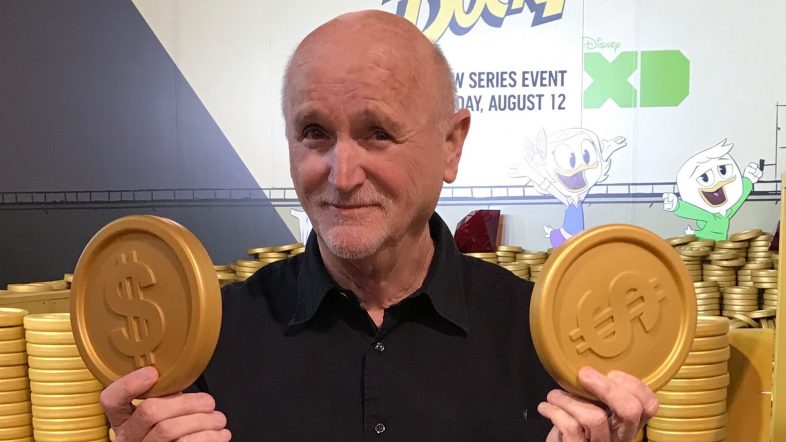 You may not recognize Mark Mueller’s name, but you certainly know his work, especially if you’re a fan of ’80s and ’90s pop.

In 1985, Heart’s rendition of Mueller’s “Nothin’ at All” reached number 10 on the U.S. Billboard Hot 100 chart, and climbed to number six on Billboard’s Mainstream Rock listing. Jennifer Paige’s “Crush”, which Mueller co-wrote, hit number three on the Billboard Hot 100 in ’98 (you might also know it from Lea Michele’s cover, which appeared on Glee roughly a decade later). Amy Grant’s “That’s What Love is For,” another Mueller creation, spent a few weeks in the number one slot on Billboard’s Adult Contemporary listing.

That’s an impressive track record, especially considering that Mueller never set out for a career in television. “DuckTales came ten years after I’d started writing pop songs and I had just come off a top-10 radio hit. I came to LA to write hit songs for the radio,” Mueller says. “I never thought I’d get one TV theme song on the air, let alone two in one year.” In fact, Mueller’s experience writing pop songs, not TV themes, got his foot in the door. Disney had a very unique vision for DuckTales‘ theme, and Mueller fit the bill perfectly.

It all comes down to the hook

Here’s the big secret to DuckTales’ musical success: the DuckTales theme is secretly a pop song, not a TV theme. Disney “didn’t want it to sound cartoony,” Mueller says. “It’s catchy because it was written to be like a radio hit.”

Like any popular tune, Mueller says, “a good theme song really gets into your head so you can’t forget it…. It should make you want to sing along.” That’s why the DuckTales theme works: it’s got a strong hook. “Examine any hit song you love on TV or radio,” Mueller says, “and you will discover a dozen hooks baked right in.”

The DuckTales theme is no exception. There’s the iconic “Woo-oo” that punctuates the song’s chorus. There’s the thumping bass line. And the trumpets. And the way that performer Jeff Pescetto stutters when he says the word “danger” (a technique that Mueller used again in the chorus for Chip N’ Dale’s Rescue Rangers).

It’s all fun and lively, and makes certain that DuckTales sticks in your head. “My job,” Mueller says, “was to let the audience know they were about to have a great time.” He did. 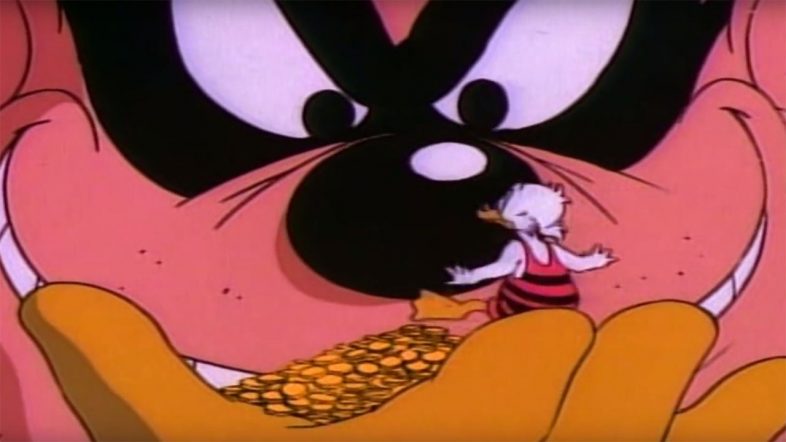 Disney heard many theme songs before they settled on Mueller’s. The composer jokes,”Disney knew exactly what they wanted—once they heard it.”

But Disney did give Mueller some fairly specific directions. Like the comics that inspired it, the DuckTales cartoon tells fast-paced, visually dynamic adventure stories, and Disney wanted the song’s lyrics to reflect the show’s action-based roots. In addition, the DuckTales series was conceived as part of Disney’s effort to change the syndicated cartoon industry by fusing well-told stories with high-quality animation. DuckTales’ visuals—which were markedly better than those of other cartoons on the air at the time—were one of the series’ big selling points.

That’s why the theme song is full of things like lasers, race cars, airplanes, and mysterious villains. They’re all things that move, and that can be animated. That sense of motion makes the credits fun to watch, and also lets viewers know what they’re in for. DuckTales is many things, but “slow” is not one of them.

The official definition of “duckblur” 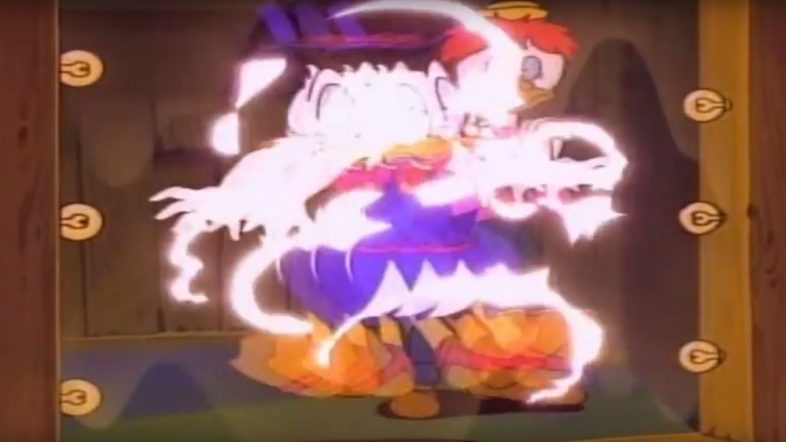 While adults can and do enjoy the series, DuckTales was made for kids, and it’s not all action, all the time. The show devotes plenty of time to comedy, too, and the theme song is no exception. Still, there’s one lyric that’s baffled fans since the 1980s: what the heck is a “duckblur,” exactly?

Mueller gets that question a lot. “We have to go back to the action-oriented directive I got,” Mueller explains. “I needed something wacky and fun suggesting movement so I thought, well, when things happen fast they go by in a blur, and we’re talking about ducks in the song…”

And there you have it. Mystery solved.

Of course, the word has a second, more practical origin, too: “Also, [duckblur] loosely rhymes with Duckburg,” Mueller says, “which, trust me, is not easy to do.” If anyone knows that for sure, it’s probably Mueller. We’ll take his word for it.

According to Mueller, there’s one big difference between a run-of-the-mill pop song and a television theme. Pop needs to reach a wide, general audience, while in television, “you have to be specific.”

Mueller usually works on spec. He writes his songs first, and then sells them to artists after he’s finished. “In a pop song, being specific can really limit who will want to record your song, so you don’t do it,” Mueller says. “You have to hit certain broad themes.” Keep your themes simple, and it’s very likely that a performer—and their fans—will feel a strong connection to the piece. That’s one reason why love songs are so popular. We’ve all been there.

By contrast, a television theme needs to explain the show’s premise while delivering a song that’s catchy, fun, and short. That’s challenging, and Mueller calls out the tunes that kick off Friends, Gilligan’s Island, and The Big Bang Theory as good examples of solid TV themes. All of those songs, Mueller says, “[tell] you about the characters and the story. As a viewer, you’re ready to dive in.”

DuckTales belongs on that list, too. In under a minute, the DuckTales theme tells you where the show is set (Duckburg), who the main characters are (a bunch of ducks—and not ponies or rabbits), and what they’ll be up to—i.e. solving mysteries and hunting for treasures. The specifics of the story vary from episode to episode, but the general set-up? It’s all there.

Once every month or two, Mueller scours YouTube for new covers of the DuckTales theme. He loves hearing how fans reinterpret the song (the Warp Zone’s “DuctTape” parody is a particular favorite). Still, there’s a big difference between a fan production and an official recording, and as soon as Disney announced its 2017 DuckTales reboot, Mueller began wondering how they were going to handle his iconic tune.

Once Disney had a version of the theme that they liked (and Mueller says that they “did quite a few”), they invited Mueller to the Disney lot for a preview. Going in, Mueller had a number of reservations, but he didn’t need to worry. “It turned out great,” he says. Mueller gave the revamped version of the theme his stamp of approval, and helped promote the new series ever since.

“As a writer, to have something like DuckTales happen to you is unbelievable,” Mueller says. “With a pop song, generally that’s only few months while it’s a hit on the radio. But with a TV theme song, it can last decades.” In DuckTales’ case, Mueller wrote a song that’s set to delight two separate generations. “To be talking about DuckTales 30 years later and having people who loved the song as kids now sharing it with their own kids and creating new happy memories,” Mueller says, “well, that’s beyond my wildest songwriting dreams.”

If you’re interested in learning more about Mark Mueller, check out his website and look for his upcoming Instagram feed at @markmuellersongwriter. Currently, Mr. Mueller is collaborating with Downton Abbey actress Lesley Nicol on an original musical, which has been performed in London and Hong Kong, and which will grace the West End sometime in 2018.